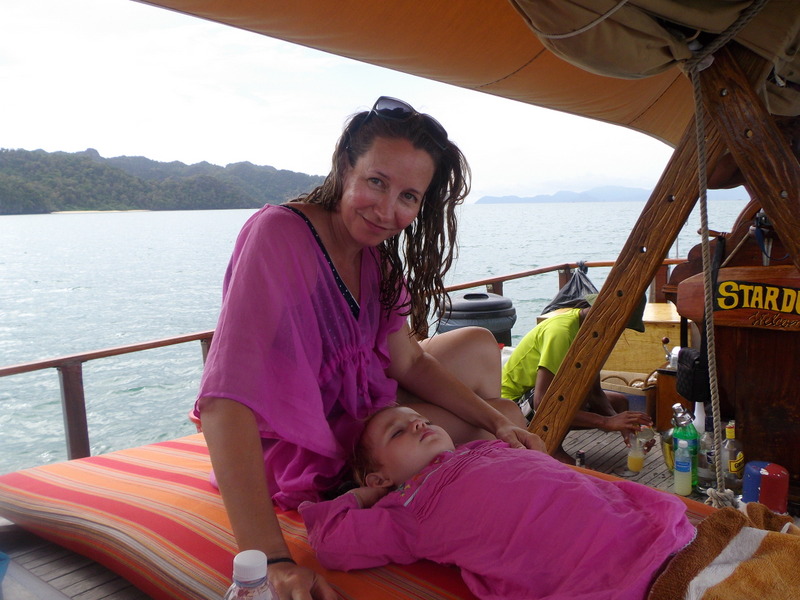 You may well ask! Weeeellllll- it was most definitely not an overnight decision.

The first time we came here was 2012 – I remember that year because it was the year I found out I was pregnant with my second child, exactly two weeks after Hubbs had booked and paid for a round the world trip.

We’d already packed our London house and found tenants. Tickets for our trip for me, him and our one and a half year old were already tucked inside our passports in the safe. Why did we still go after finding out daughter number two was on the way? Well that’s another story, and I’m sure I’ll get around to telling it to you sometime. (And when I do I’ll add a link here!)

So yeah, we were planning this round the world trip and we decided we’d spend seven weeks in Vietnam. Back in London we used to drive over to Kingsland Road, East London once a week to got to the Vietnamese there and eat salted prawns – our favourite. That’s why Vietnam made our list – so we could have salted prawns for breakfast, lunch and dinner (possibly snacks too.)

On that first trip to Vietnam we started off in Hanoi. Hubbs described it as properly foreign/properly weird/properly love this place.

From Hanoi we got a sleeper train to Danang. Two thin rattling beds in a compartment – one for hubs, one for me and daughter and two top bunks for Mr and Mrs Japan (who we’d never met before). Thankfully said Hello, shared food, climbed into their bunks and then slept for the entirety of the trip.

I didn’t sleep for any of the trip. I was five months pregnant by this stage of our trip. We’d left London three months before and had already travelled to South Africa, Singapore, Langkawi and Thailand. Being my second pregnancy my bump was huge. Plus Daughter was sleeping in my tiny train bed, which was about thirty centimetres wide. Plus Hubbs was live streaming match of the day on his i phone as Arsenal were playing. (I can’t remember if they won – he’d know.)

By the time the light started to come through the windows, the smell of noodles was wafting through the corridors, mixed with the faint smell of pee. I won’t go into the toilet situation. I’m sure you can imagine.

I struggled to get Bump, Daughter and my body out of bed to look through the windows and was greeted with one of the most beautiful views I have ever seen, The South China Sea.

I will never forget that green of the mountain and that blue of the sea. The colours were vibrant, shimmering and utterly beautiful.

Arriving in Danang, a car met us, scooped us and our luggage up, and one hour later deposited us in a makeshift car park in An Bang. There wasn’t another soul to be seen. We were met by our surly French landlord who told us to wait at Soul Kitchen until he came back to get us because our house wasn’t yet ready. He pointed us in the direction of a row of small shack like buildings, thrown together in bamboo.

I waddled down the tiny track, holding Daughter’s hand, Hubbs trailing the luggage behind us. Squawking chickens on sun-dried, dusty wasteland one side of it, a row of bamboo shacks on the other, completely obscuring the view of anything at all. Arriving at Soul Kitchen we were ushered through the cafe to a table.

I slumped into a chair, exhausted. Hoisted Daughter on my lap. Hubbs threw down the luggage and sat next to us. We looked up to see the bluest sea, with the emptiest, yellow sanded beach, with tiny corical boats dotted along the sand.

“This Is It.”Said Hubbs. And so it was. We had found what we were looking for.

Equally amazing – they had European coffee, and food that Daughter recognised. I tried to order salted prawns, we hadn’t managed to eat them yet. The waitress spoke English (a first), she explained that you can’t get salted prawns in Vietnam – that particular dish is from China.

We had a blissful breakfast staring out at the ocean. Then to my right I noticed a white haired woman dressed all in white. She smiled and in a Scots accent told us everything we needed to know, from where to buy crates of beer to where to buy citrus soap to stop the mosquitos from bitting Daughter.

It was love at first sight, and the longer we were in Vietnam on our first ever trip, the less we wanted to leave – but we had to. Back then there were no big hospitals and I was about to have a baby. Plus we’d payed for the round the world trip!

We travelled through Vietnam by car for a week and down to Ho Chi Minh. Then we flew to Singapore, onto to Bali for six weeks and Lombok for a month. In Brisbane, Australia, we stopped and I gave birth to daughter number two. When she was six weeks old we carried on our trip to New Zealand, the Cooke Islands and South Beach, Miami. Finally getting home to Kentish Town, London when she was five months old.

It took five years and two more holidays to Hoi An to make the move. We now live 120 steps from the ocean and a short walk from Soul Kitchen.

Now I’m on my fifth draft of the book she encouraged me to write two and a half years ago. Here in Vietnam we are back in lockdown so I haven’t seen much of the White Haired Angel lately. But I expect we’ll be chatting soon about writing, about voice, filtering – and she’ll be pushing me to be better – even when I think I’m finished!

One Reply to “Why Move To Vietnam With a Family?”