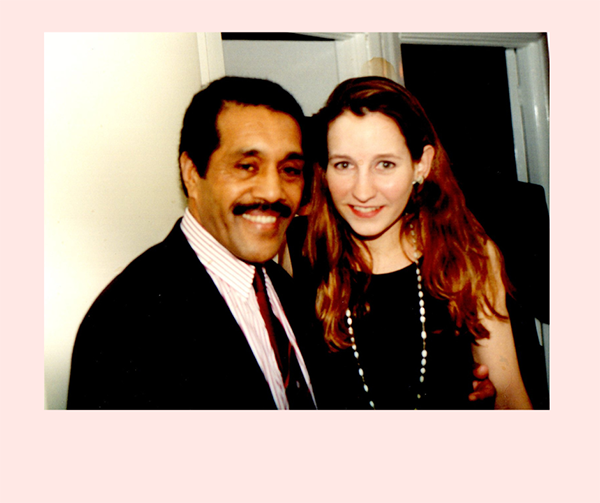 From my parents’ front window I watched my Scottish ‘uncle’ pull up at the front of the house and catapult himself out of his car. Cantering over the doorstep, he was already telling his first story, as his wife (who was ten years his junior) ran behind him trying to keep up.

My Fijian ‘aunties’ and ‘uncles’ followed. The aunties were weighed down with huge pots of curry, the uncles wore their bula print shirts – the colours so loud they were practically neon. Every uncle brought a spare shirt for my dad. (He still has a drawer full of them. They no longer fit.)

As each family arrived mum greeted them in a rush of hugs and an about turn to the kettle, “I’m making you a nice cup of tea after that long journey.” Which could mean anything from East London to the Welsh Valleys to Harrogate.

Our families were an international crazy gang, who had adopted each other during army postings to Germany, Norway, Cyprus, Northern Ireland and other army bases during the sixties and seventies. The friendships were further cemented by babies and postings and occasionally grief, when blood families were too far away to give comfort.

Once the house warming party was assembled a cram of aunts filled up the kitchen, unwrapping food from silver foil, peeling lids from mountains of Tupperware, lifting enormous pots onto the stove and crowding around the cooker. All this in a kitchen only slightly wider than a nineteen year-old girl holding her arms outstretched. (I was the nineteen year-old girl and they shooed me out of the kitchen stating that I was useless and to go and chat to George Kubu, or Gorgeous George as the Fijian aunts called him. Those aunties were always desperate to unite the nations of Fiji and Britain with a marriage – as was my Mum.)

I was what’s known in the military as an army brat and though I loved my ever evolving life collecting friends and learning about new cultures I often felt like I’d left part of myself in every country we’d left behind.

By the mid eighties we’d settled back in the UK, but I couldn’t get a grasp on civilian life. I seemed to have left the best part of myself in a small army town beside the ocean in Cyprus two years earlier and I felt like I would never get her back.

“Is the curry hot enough Oni?”

There were no dishes big enough for the curries so pots were heaved down the hallway and thumped onto the dining room table as my mum leaped to skim place mats under the scalding bottoms. It was the first dining table she’d ever felt protective of and the first that wasn’t army issue.

After the polite scrum over Aunty Mary’s curry (everyone knew hers was the best, but we’d never say that out loud,) we sat, plates on laps, on sofas, fold-up garden chairs, cushions, the floor. Those curries had magical properties and are the only thing I can ever remember eating at the many parties my parents hosted. There must have been other food – I vaguely remember flat bread, and of course mum’s sausage rolls. But when we ate my aunties’ curries it was the only time our entire family was together that everyone was quiet.

“Oni, what spices did you use? My mouth is burning off.”

The ukulele came out and Aunty Mary started to play as the Fijians sang in beautiful harmony, while the rest of us mimed and pretended we knew the words. Then came the claps of bula bula as the ‘adults’passed around a wooden bowl of grog brought back from Fiji that spring. It got them all stoned, while me, my sister and my cousins rolled our eyes and chatted in the corner about raves and pills and fashion.

Eventually the still heaving dining table was pushed to the side of the room, and dad showed off his brand new hi-fi while he put a record on. My Welsh aunt, so small and neat, was the first person to dance the jive, pulling everyone else up until the dining room was jumping.

As two uncles carried another uncleup the stairs, still sitting on the chair he’d fallen asleep on, his son looked on disgusted and a Halifax aunty in her leopard print coat told me the tale of how she met her husband and how she was still madly in love. I was captivated by her throaty roar and wild sense of humour. I wanted to be like her when I ‘grew up’.

Later still, one aunt rolled herself under the dining table to have a nap. She slept through the dancing, slept through everyone setting up their camp beds, either in tents in the garden, or in the garage, or on the floor, or crammed into beds top to toe. She slept through me sneaking off to my boyfriend Charlie’s house and back again. She finally woke, rolled back out from under the table, straightened her hair and joined the party for bacon rolls in the newly built conservatory, not realising it was now breakfast.

Those Fijian, Scottish, Welsh, German and English army aunts and uncles, along with my mum and dad forged my idea of how to live and how to be. They had all found Britain to be the place they wanted to live for longer than a posting. They had un-tethered themselves from the idea of returning to their home towns to settle and instead built homes where they felt most at home.

But London was a far cry from anything I’d ever known and I bumped around trying to work out what on earth the class system was, and why people cared. I didn’t know how to be or how to make friends. With no army brats to guide me through I grew lonely for the oceans of Cyprus. For the heat and the sand and the sound of the waves. But all my friends had left too, for other countries, and the beginnings of careers and I knew the Cyprus I left behind – the one where I grew from a girl to a woman – was no longer there. We’d been replaced by new families having their time in the sun.

Eventually I found my tribe in London. Like me they were entrepreneurs, into art and fun and dancing and curry, and they too had all grown up in other people’s countries or were now in a country that wasn’t their own. Maybe that’s why we were all so open to new people and new places. I fitted in with them, if not with the community at large – where I always felt so other.

Once you’re an army brat, that urge to roam never leaves. I have travelled the world looking for ‘home’. Now, like my parents once did, I live in a temporary house with my children and my husband. We live beside the South China Sea in Vietnam. Expat living is not unlike army living. Every expat I know is a square peg and we all rattle around the board not bothering to try and fit in. I am comfortable with this life.

Over time one by one my aunts and uncles have begun to quietly leave the party. They’re on another posting now, past the silver linings, where the stars play. But I can still see them, filling up the kitchen, laughing at me and my sister’s attempts at dancing, bringing joy and stories and all those lovely things that we were brought up on.

That girl I left in Cyprus, she’s still there, beside the Mediterranean Sea. I will never be her again. I have children now. I have a husband. I have lines from all the laughter and a hip made of steel along with steel that runs through my core from life’s lessons. I’m older now than my aunts and uncles were at that house warming party. But occasionally the girl I left behind comes out to play. I find her lying beside me on the sand, staring up at the endless ocean of sky, listening to the waves’ soft crash. She’s still here. I’m still here. And sometimes when I need her to remind me where I’m from she whispers to me across the ocean.

6 Replies to “Reunited Across An Ocean Of Time.”